Hanna celebrated her fortieth birthday with a volunteer trip to Romania!

Hanna celebrated her fortieth birthday with a volunteer trip to Romania! 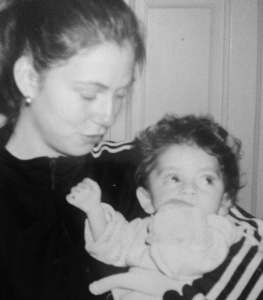 In 1992 I was 17 and on my way to Romania. I really didn’t know anything about what I was about to experience. I had seen pictures on the news and heard a little about what it was like from friends who had been there, that was all. The idea was that my classmate Pia and I would go there and do some practical work for a few weeks. We were supposed to paint and help renovate the orphanage for boys in Popești. Once there, it turned out there was no material so we ended up spending our days together with the children. We were at the children’s hospital in Marghita and at the orphanage for boys in Popești.

This came to be one of the major experiences in my life. Since that day, this country and these children have been with me in my thoughts, together with a wish that one day I would be able to return.

On the 11th February this year, Sofia Gustafsson wrote on Facebook that there was room for more volunteers on a construction team to Marghita, Romania and I thought – I want to come!

I was soon going to turn 40 and I decided to give myself this journey as a birthday present. From my husband I received the gift that, while I was away, he would take care of everything at home.

On March 4th, at 5.30 in the morning, I kissed my family goodbye and left for Värnamo. The only thing I knew was that I would meet the rest of the team in the car park outside the Pentecostal church in Värnamo, that we would travel with a minibus to Malmö and from there fly to Budapest. In Budapest a car would be waiting for us and take us to Marghita.

The journey went exactly as planned. We arrived late in the evening and were greeted with a fully set table. I felt so welcome! 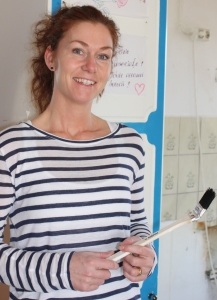 To be able to return after so many years was amazing! This time I was able to paint, supplies were not a problem!

A major difference in the town since last time I was there was that now there were shops and in the shops there were supplies. Together with the others in the construction team, I worked in the family home in Marghita. New walls were put up and painted so that each boy would have his own room. I also received a special mission – to paint flowers on the wall in the new living room. In each flower there would be a picture of each child who lived or had lived in the large family. I think in total it was 32 flowers!

So so much has happened during these years and I am deeply touched by what I have seen. I understand that with new rules that appear, the work needs to change and I guess it’s a job that never ends.

The work was so much larger than I had imagined and it’s hard to understand the breadth of all the efforts, all the time and all the gifts that have been put into it.

“Whatever you have done for one of these small ones.”

During my time in Romania I had a daily prayer:

“God help me today to see the clear pattern and the plan that saturates my life.

What has been, from my first breath on earth you carried me.

Without regretting what has been and free from worries of what will come, help me God to see that the moment of eternity is now.” 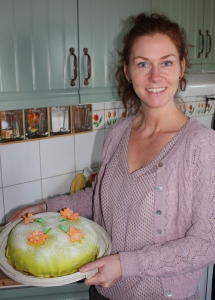 t might seem small and pointless to paint flowers on a wall when you have four children at home and lots of things to do at work and especially when the needs in the whole of Romania are so immense. But when I was standing there painting, I felt so strongly that this is exactly where I am supposed to be right now and my most important task in this moment is to paint flowers on a wall in Romania.

I want to thank everyone in the construction team that I travelled with, Arne, Lars and Barbro, Margareta and Sven-Eric, Sofia and everyone else for taking such good care of me. I can’t imagine a better fortieth birthday!

I recommend this to all ‘40 year olds to be’ if you want to give yourself or someone else a birthday present (of course other anniversaries will work fine too ). To have been a small, small part of this work is something big.